CHOOSE-A-THON!, also known as “Walk with CHOOSY” is a Y Head Start Family Engagement Activity for I Am Moving I AM LEARNING (IMIL), an early childhood curriculum which encourages learning and movement while combating childhood obesity. “Choosy” is the program’s irrepressible mascot who is all about making healthy choices! The event, which originated as a Baltimore city Y Head Start program six years ago, has been so successful that now it’s been extended to our Baltimore County and Anne Arundel County Head Start families.

CHOOSE-A-THON is designed to provide families with an opportunity to engage in fun, physical activities in their community. This year’s City event was held in West Baltimore at Frederick Douglass High School’s track and field and was their biggest ever, with close to 400 families registered!  In a part of the city challenged by crime and many other issues, this provided families a much needed positive and engaging activity in a safe and healthy environment.

The event for Baltimore County families was held at a County park, as will the Anne Arundel event to be held next weekend. 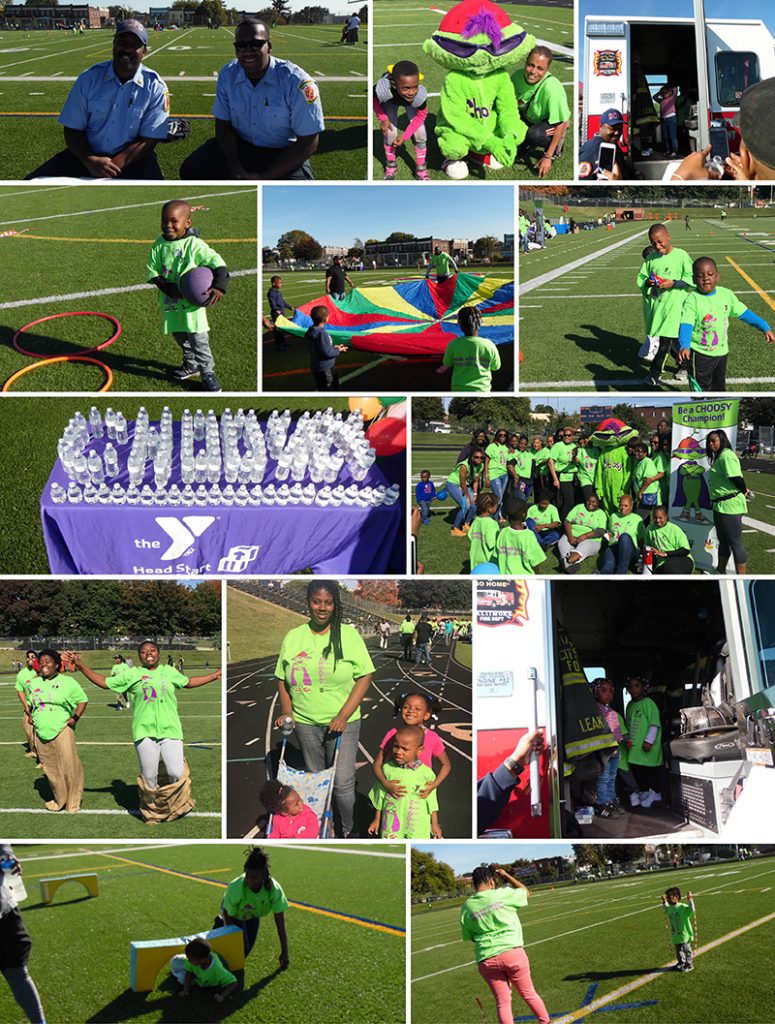 At registration, each Head Start child and parent received a CHOOSY T-Shirt and prizes are raffled, rewarding and encouraging each lap walked. All families also receive a packet filled with games and healthy recipes to take home.  Of course, CHOOSY made a guest appearance and was a huge hit!

There are many people and organizations to be thanked; starting with Giant Food’s “Our Family Foundation,” which funded the expansion of IMIL into all Y Head Start classrooms, making the focus on health and nutrition a daily, intentional and ongoing focus within our early childhood curriculum.

Those who helped make the event successful include the Baltimore City Fire Department (which provided onsite fire truck tours and “Hands Only CPR” demonstrations), Amerigroup (which provided information on the ACA), and Y associates Chotney Copeland, Tijuana Huggins, Amy Taylor, Frank Holden, Roikensha Hinton, and Alexis Perkins, as well as Principal Aaron Clark of Dickey Hill Elementary, Dr. Linda Carson, founder, and last but not least, Y associate Nakia Williams whose son doubled as  none other than CHOOSY himself!

Thanks to all for the hard work, especially by The Y Baltimore City Head Start team which has grown the CHOOSE-A-THON from a fledgling activity for a few families a mere six years ago into a major, regional family event promoting good health in every way!

The Y in Central Maryland