A week ago this past Friday afternoon I had the happy occasion of participating in the now annual Y Associate Team Triathlon, held at the beautiful Hill Family Y in Westminster.  It was a great way to end the week on a high (if tiring) note and spend time with some energetic colleagues across the organization (all of whom except one were younger than yours truly!).  The brainchild of our friend and former Chief Operating Officer Bob Brosmer five years ago, this event has now become part of our larger effort to encourage all Y associates to get and stay active and to promote the broader concept of well-being amongst our ever-growing workforce of over 3,100 associates.

The triathlon was fairly modest in its expectations, as the swim required a 250 yard swim (10 laps in the pool) of the first team member, six miles on the spin bike by the second team member and a mile and half run by the final team member.  Appropriately so, the run looped around the grounds of the Hill Y’s attractive campus, with camp kids cheering on, and ended right at the brand-new splash pad.  More than one of the participants had the urge to jump the fence and cool off on the hot afternoon.  However, with our VP of Quality and Risk Management, Ryan Trexler, in attendance, such risky behavior was discouraged and avoided!

Ten teams of three Y associates ended up participating with many other Y associates on hand to support their colleagues and cheer us on (or, in some cases, dish out some inventive trash-talk…).  Diana Beeson, who heads up our Associate Well-being efforts, both organized the fun and participated.  Kudos go out to Diana for her relentless good work, enthusiasm and encouragement.

The competition was definitely friendly, with modest prizes and medals made out of paper plates (we spare no expense here at the Y!) awarded to the first three teams that managed to lunge across the finish line. 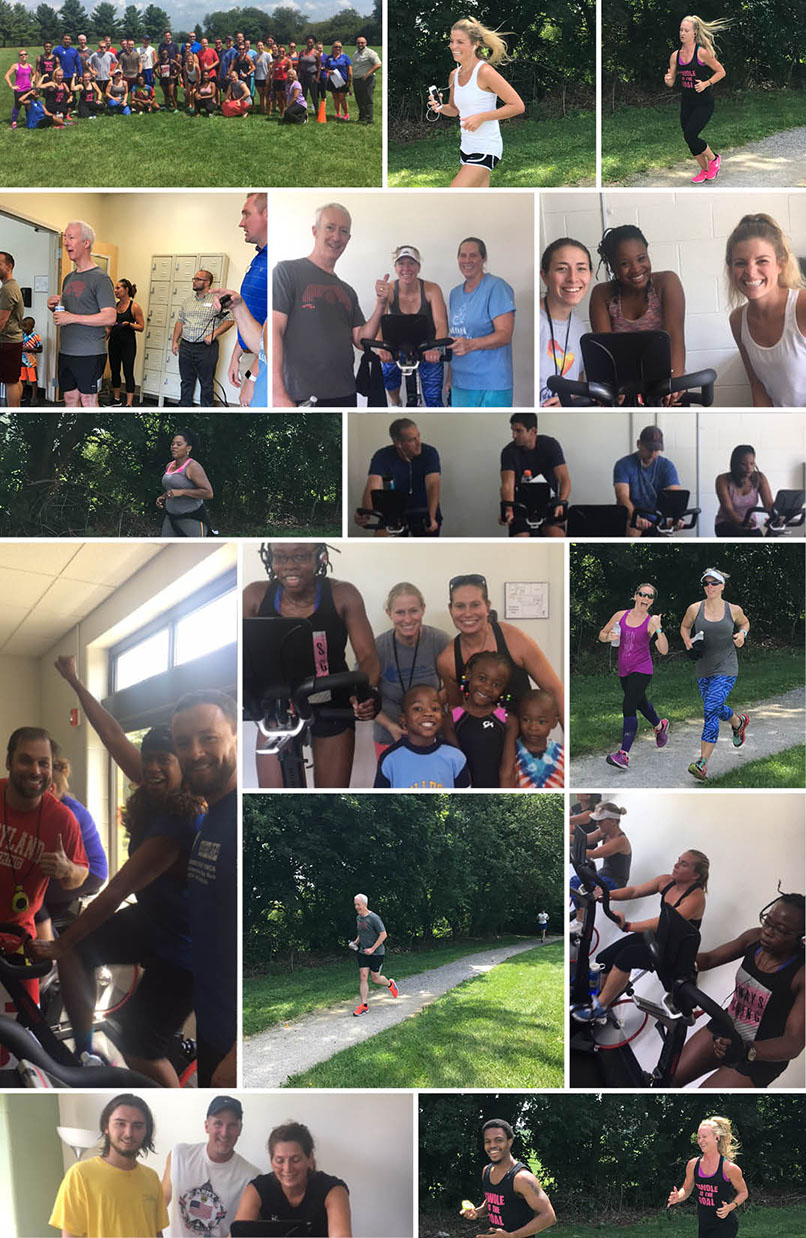 First place went to the team with home-field advantage at the Hill Y: Mike Walters (run), Patricia Cullop (bike) and Andrew March (swim).  I’m beginning to think that Mike’s associate recruitment strategy is finely targeted to winning this competition on a regular basis.  I can’t verify that, but a full investigation is underway.  In any case, well done Team Hill!!

Second place went to the team with the oldest participant, James Bullock (swim), who is in his early 70s and is an actual triathlete in his own right, as well as the Orokawa Y’s Sean Davis (bike) and Ryan Gadow (run).  A big round of applause to all three, but James in particular!  In an effort to move up to first place, I believe that next year Ryan will be sending Mike Walters to a Y training somewhere in the Midwest that somehow conflicts with the date of the Associate Triathlon.

Third place went to clearly the most “pieced together” but scrappy team of the bunch.  Halie Argubright (swim) from the Ward Y and Zalanka Jones (run) from the Y in Arnold (Greater Annapolis) were kind enough to allow me to be the cyclist on their team.  We all met for the first time a few minutes prior to the start of the competition, but it worked out great and I give all the credit to my two much younger and more talented colleagues.

Now that this year’s festivities are over, my challenge is to at least double the participation in next year’s triathlon.  Neither tremendous athleticism nor youth are required; just some modest effort and a desire to spend time with your colleagues in the spirit of fellowship and well-being.