This time of year is always frenetic at the Y.  Our hardworking Y family center associates and marketing team worked relentlessly to produce a terrific membership surge in January, during which we welcomed 4,426 new membership “units” (a unit being a household or an individual, or any configuration in between) and over 12,000 total new people into our Y.  Yes, parking was at a premium in a lot of Ys during peak time, but that’s a beautiful site to someone like me.  A bustling Y is a happy Y, and a community that embraces the Y’s mission is a certainly a healthy community.

During the past month, our VP of Membership Development, Tammy Sisson, did a great job of not only keeping everyone apprised of the daily (and sometimes hourly) numbers, she also paid close attention to the stories of the people who were coming into our Ys.  Those stories bring substance and purpose to the numbers.  Here are just a few snippets from Tammy’s daily report:

Dina looked a bit irritated as she walked in, asked her how her morning was going and she said she would have rather stuck to her plan of getting here early instead of sleeping in and coming in later. I encouraged her that she is here now and her day will get better after her work-out!

​Anna came up to the desk and asked if there was a trainer she could talk to for advice. I mentioned that I​ am a trainer and asked what her question was. She talked about how she isn’t that motivated anymore and gets bored while running on the treadmill. She coaches track and teaches middle school so finding time during the day is hard for her. We are going to meet for a consult to discuss ideas on how to get her motivated.​

​Dr. Hopkins came in to join primarily for the pool. He has a most interesting background in playing major league baseball as well as playing rugby against Johnny Unitas. About ten years ago he was hit by a truck while in his car causing damage to his hip and knee.

At Pasadena on Friday, I had a great conversation with Mel, who was heading to Stay & Play to check her two little ones in. She told me how much her children loved the associates, and that they had so much fun, that sometimes it was difficult to convince them it was time to leave.  Mel told me that she didn’t know what she would do without the Y; that her husband is in the military and is often gone for months at a time.  The Stay & Play allows her to have some alone time, time to focus on her own well-being, and also to spend time as a family (they LOVE the pool!).  Mel and her husband have been to a couple of different duty stations, but she never wants to leave here because of the friends she’s made at the Y and because the Y just feels like home to her.

Meet Mike. He’s been a member at the Dancel Y since 2003, when the Y instantly became a saving grace for him. He had been coming in 5 days a week – 3 days to work out and the other two to do his famous crossword puzzles. Everyone always looked forward to Mike coming in, partly because he always had a small bag of candy (usually M&Ms) to share with everyone!

This past summer Mike suffered a brain injury and was in the hospital for several months. When he was moved to a rehab facility, a member and I visited him dressed as his beloved M&M’s. He was so surprised and happy to see us. His daughters vowed that he would be back at the Y soon.

Mike has been back at the Y since November, and while he still has days that he is not at his best, every time he comes in he is smiling and always tells us how much he loves the Y.  I stay in touch with his daughters, who are out of town, and they tell me how important the Y is to him.  They are thankful that he has a safe place where people care so much.  This is why I (we) do what we do!  We have the opportunity make a difference every single day.

Jerry is waiting at the door at 5:30 am every morning to get in and start his workout. Two years ago, Jerry came in on a walker, and on the recommendation of his physician, he started his Y membership. He started walking in the water to slowly build up his legs which had atrophied after being bedridden during a long illness. Jerry’s progress was slow.  However, the associates began to notice his strength was building.  He progressed to using a cane, and then, nothing at all. Jerry attributes his recovery to his water workouts and the Y associates’ encouragement. Today, he tells everyone about the Y, and how it helped him get where he is today – competing in senior triathlons! Jerry was our Y Mission Moment in our all associate meeting this past summer.  He truly is an advocate of the Y and a loved member of the Randallstown Swim Center Y.

I started working out with Paige along with a friend of mine at the Weinberg Y back in August. We 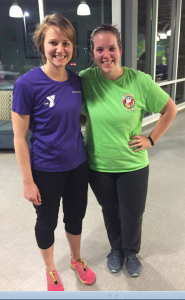 had both had babies about 8 months earlier and were tired of feeling overweight, sluggish, and out of shape. Paige was amazing right from the get go. She paid attention to what we needed and where we were. She never made us feel embarrassed or ashamed of our bodies. What’s more, she was incredibly patient as we navigated childcare issues, full-time jobs, and took all of our rescheduling issues in stride.

When my friend decided she wasn’t able to do personal training anymore, I panicked. I was loving my time with Paige and didn’t want it to end. When I reached out to Paige, she was positive and enthusiastic about me continuing on this journey, and even offered to find out about training me at my home Y in Towson.

My work with Paige has truly been life changing. Not only had I been struggling with my after baby body, but I’ve also struggled with weight my whole life. I want this weight loss and fitness journey to be the one that sticks for my son and our family. Paige is so gentle and so overwhelmingly positive that she actually has me convinced that I can do this. That I can get there, not only back to my pre-baby weight, but to my healthiest weight.

All of our sessions are new and different. We’ve never done the same one twice, and I love it! She’s challenged me, pushed me, and I’ve had so much fun. I’ve lost 33 pounds since starting with Paige, and I know I can get the rest of the weight off. I’m loving working out, and I love the feeling of my body getting stronger, not just smaller.

I can’t stress enough how much I’ve gained during my time with Paige. It’s a bright spot in my week and time that I take for myself, which is a gift as a new mom! I’m so lucky that I found Paige and so happy to continue my work with her.

Thank you so much for offering such an incredible personal training experience. The Y is one of my most favorite places to be and communities to be a part of.

So, there you have it: just a few stories from the thousands of members who come through our doors every day.  To these and so many more, the Y is not a building or a place with lots of people milling about.  The Y is their community; it’s their place of well-being.

Thanks to everyone who made our “membership surge” so successful in January.  That surge simply means more stories of good people and families trying to do just a bit better.