A few weeks ago what has now become a regular Y event took place, but it is anything but regular and, though soft spoken and modest, nor is the man behind it.

For 16 years running, Y volunteer, donor and friend Martin K.P. Hill has, with his tell-tale generous spirit and kind heart, underwritten the cost of a warm and festive evening which motivates and thanks Y donors in Carroll County who participate in our Send a Kid to Camp campaign.

Each year the event is held at the beautiful (and delicious!) Antrim 1844 Inn in Taneytown and each year a special guest from the sports world is featured.  Of course, we have a lot of special guests from across the spectrum (this year, we had two of the Daily Record’s Top 100 Women in attendance, Leslie Simmons from Carroll Hospital Center and Judge JoAnn Ellinghaus-Jones, both Y volunteers!). In prior years, we’ve been joined by Ravens coaches John Harbaugh, Dean Pees and Chuck Pagano (who is now the head coach of the Indianapolis Colts).  We’ve also been joined by Ravens players Matt Stover, Justin Forsett and former Colt great Tom Matte. This year it was Ravens Quarterback Joe Flacco’s turn.  Joe was terrific, captivating the audience with a behind the scenes peak into the challenges and excitement of being a Super Bowl champion and MVP, not to mention a worshiped role model for fans everywhere!  Joe was interviewed by another football great and wonderful Y volunteer, former Colts All-Pro and sports commentator, Stan White. 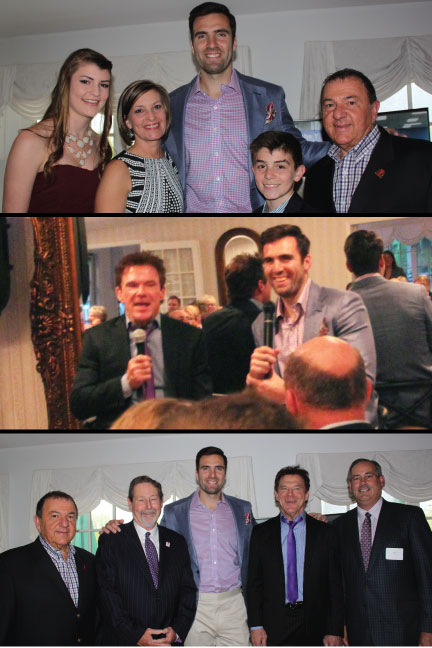 ​Of course, Joe talked a lot about football, but what was most important and clearly defining for him was the emphasis he places on family. He described how he will sit in his car in his driveway on the phone after driving home from practice to complete his daily conversation with his dad and he talked about how important his wife and young children are in his life. Asked about what he believes is the single most important message for young people to hear today, he said, without hesitation, that “they need to know someone has their back.”

This is where Marty Hill comes in. He is one of those rare people you come across who moves through life with no pretense or ego. To meet Martin K. P. Hill, you would never know that he is a highly successful developer and generous philanthropist.  Marty, along with his entire family, has consistently devoted himself to the Y cause, demonstrating to children in need that he, in fact, “has their backs.”

Over the years, the Antrim event has raised well in excess of $200,000 for our Send a Kid to Camp campaign, giving thousands of children in Carroll County the gift of safe, fun and purposeful summers. The impact of this cannot be overstated when you think about the fact that the alternative for families who can’t afford camp is often to leave kids home and idle during the summer.

To borrow from the Yiddish, Marty is, quite simply a “mensch,” meaning a person of integrity and honor. It is because of his continual and unflinching support of our charitable cause that in 2011 we renamed the redeveloped Y in Carroll County the Hill Family Center Y.  In typical Marty fashion, at the ribbon-cutting he chose to shine the light on his family rather than accept praise for himself.

Given Marty’s passionate concern for the well-being of children, we were proud to honor him this year with the Geraldine Young Distinguished Service to Youth award. The irrepressible Geraldine Young, wasn’t able to make the event (in her early nineties, she’s no longer much of a night owl), but she sent her regards and told us that Marty is one of her all-time favorites!  I can think of a lot of us who would share that sentiment!

Our 2016 Send a Kid to Camp campaign has only one week to go to make goal and in so doing assure the children in our region who need us, that as a community we indeed “have their backs.” In Marty’s honor and theirs, I am calling on every Y volunteer and associate to give this last campaign week every ounce of energy the young people we serve deserve.  Let’s wrap up this important campaign as the MVPs of the families who depend on us to be there for them. Thank you for all your hard work and dedication to our charitable cause!