In case you haven’t noticed, there’s an election tomorrow.  How cool is that?

When I was a kid, I have to admit that I was a bit of a civics nerd.  I still remember the incredible excitement of getting to vote in a mock election in fourth grade (the 1968 contest between Richard Nixon and Hubert Humphrey). In my view, the coolest thing we owned in our house was a set of books that detailed everything imaginable about all of the American Presidents up to that point (I believe it stopped at either Kennedy or Johnson).  I literally studied those pages until they were dog-eared, and at one point was able to easily list from memory all of our Presidents in order, from start to finish, and then back again.  Sadly, I cannot do that any longer, but I remain committed to studying our history and to participating actively in our democracy.  In my case, “participating actively in our democracy” includes voting in every election, but doesn’t include posting partisan rants on social media, basing my friendships on people’s political beliefs or viewing those whose politics I disagree with as members of an alien and dangerous tribe.  Call me old-fashioned, but I prefer to live my life in a bi-partisan way, yet always appreciating the fact that we are “a government of the people, by the people, and for the people.”

So, I have always been astounded and a bit perplexed, frankly, by the fact that so many registered American voters simply don’t vote. In the past two Presidential elections, 60% (2016) and 59% (2012) of registered voters cast ballots.  Only 42% of young voters (18 to 29 years old) cast a ballot in those elections.  Of course, this is a non-Presidential year, and voter turnout for so-called “off-cycle” elections is desperately low, with only 37% of registered voters going to the polls in 2014, and an incredible 18% of 18 to 29 years bothering to vote.  As a self-professed civics nerd, these are distressing numbers, and much lower than most other democracies. 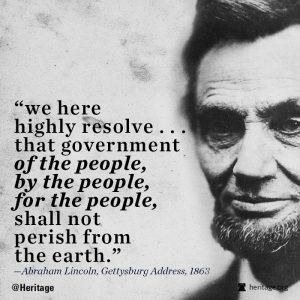 What low voter turnout means is that too many Americans are essentially “outsourcing” their role in our democracy to a minority of voters who are, essentially, deciding for them how we are to be governed and what laws, regulations and foreign policy we will have to live by.  I don’t know about you, but I have a point of view on all of those things, and so I am not willing to leave it to others to make those decisions for me.  Of course, I’m not 18 to 29 years old anymore (that ship sailed a long time ago), but I wonder why those who really have the most at stake in our democracy are so disengaged.  Tweeting, Facebooking and Snap-chatting about one’s political beliefs means nothing if you don’t get off your couch and actually cast a ballot.

So, whatever your political beliefs, I implore everyone reading this to go vote.  There are a large number of important races and local issues that require your attention.  Happily, many of you already have voted, as early voting has set records this year.  If you haven’t yet voted (and I will once again “old-school” it tomorrow and show up at 7 am at a church down the street, say hello to some of my neighbors and do my civic duty), please do so!

At the Y, we don’t advocate on behalf of any candidate, party or political belief system.  Part of the beauty and responsibility of being “for all” is that our job is to work on behalf of civic engagement and, to borrow a key phrase from the preamble to our Constitution, to use the Y’s deep and broad impact in the community to make a serious contribution to “mak(ing) a more perfect union.”

So, if you haven’t voted early, go vote tomorrow and help make our community (and our Y) a better place!