Stories of Courage & Change: Supporting the Leaders of Tomorrow 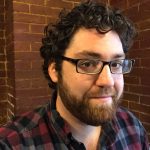 volunteering with Y Youth & Government a few years ago.

Y Youth & Government uses a statewide model legislature to build student leaders and prepare engaged citizens. With the help of 31 volunteers like Robbie, and nine dedicated Y associates, each year some 150 Maryland high school students– referred to as “delegates”—meet with their coaches at a Y or their school to prepare for statewide conferences, including a culminating event in Annapolis where each take on a different role. Whether acting as a member of the legislature, press corps, court, lobbyist or an elected/appointed representative, these future leaders energetically participate in the democratic process and principles on which this country was founded.

Robbie first became involved in the program when a friend asked him to help with a pre-legislative session. At that time, the lobbyist portion of the program was not fully developed, and Robbie saw the potential in it as well as a way he could lend his expertise.

“It’s hard to instill in middle schoolers the concept that the people in politics who fight the hardest often win, rather than the best ideas. With high schoolers in the Y Youth & Government program, you can begin to teach them the process as it exists on paper and show them how it is carried out in real life. Understanding the difference is key to being a well-informed and effective voter,” says Robbie.

Robbie believes that people outside of politics often become disillusioned because they don’t fully understand how the system works, and the levels of hard work and dedication required to create change.

“I love working with the kids and seeing them gain confidence in their lobbying techniques, developing positions and arguments, and understanding the political process.”

Robbie is just one of the many volunteers who help make this vital program run smoothly for 150 delegates every year. Fortunately, Maryland Y Youth & Government shows no signs of slowing down. Thanks to the help of BG&E, this year Baltimore City delegations have grown from three to six locations. Additionally, other delegations have nearly doubled in size!

Program Director Grace Chaisson believes there has never been a more critical time to give young people an opportunity to have their voices heard.

“Y Youth & Government is more than just an organization, a conference, or a program. Young people get involved because of their desire to learn, have a great time, and, most importantly, grow as leaders in their community.”

To find out how you can get involved, please visit our website for more information.