Thanks to innumerable Y volunteers, associates and donors, Thanksgiving morning represented another record-smashing success as 14,611 souls (adults, kids, babies in strollers, dogs) started their day with some exercise, neighborhood cheer and the simple act of helping others by participating in the annual Y Turkey Trot Charity 5k! As it is every year, it was a sight to behold, complete with costumed runners, immense good cheer and such abundant goodwill you could probably have bottled it (but then, who needs any more things to do on Thanksgiving morning).  If you remember the band R.E.M.’s great album, Life’s Rich Pageant, I think that’s an apt description of what we all witnessed. 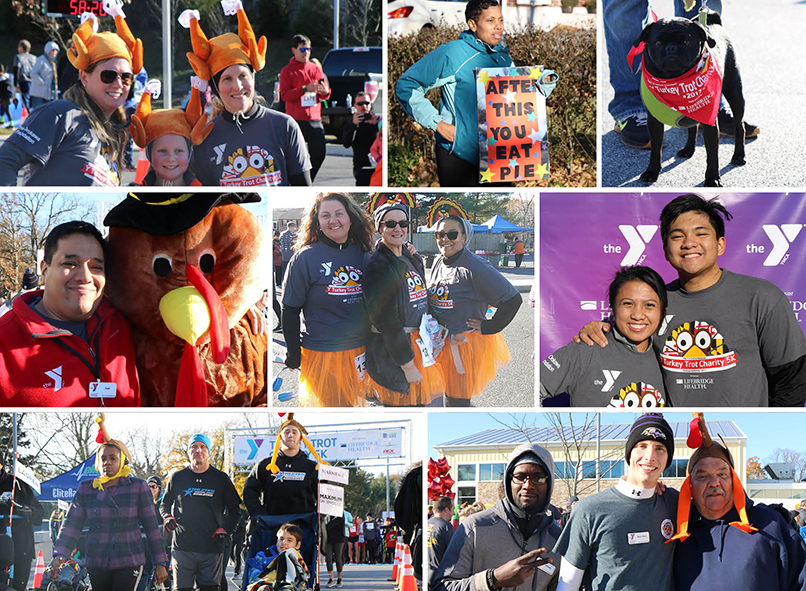 With so many participants, there are literally thousands of personal stories across the seven locations.  They range from the inspiring to the comical, from the incredible to the mundane. However, one particular story caught my attention and is something I’m sure you’ll agree is really worth sharing.

Both Kimberly Ariola and Michael Guldan work for the Department of Defense and, though Michael is deployed overseas, he promised to be home in time for his girlfriend’s special birthday (which is today) and to run the Y Turkey Trot in Westminster with Kimberly. Well, the DOD had other plans, which delayed Michael’s return home.  Yet in spite of the distance, Michael found a creative way to keep his promise.  On Thanksgiving morning in Westminster, the temperature was a bit below 40 degrees when Kimberly and her daughter Cecilia Adams ran the race.  At the exact same moment, somewhere across the world, it was a hot 85 degrees as Michael ran his own personal Turkey Trot Charity 5K “with” Kimberly on a U.S. military base! They texted and spoke at the start of the race and shared these photos before starting their runs (Kimberly is on the right in braids next to her daughter Cecilia). 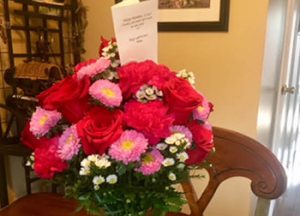 Kimberly added that she had Thanksgiving dinner with Michael’s mom, who decided to hold off on serving turkey until Michael gets home. They had steak along with macaroni and cheese instead, which Kimberly admitted was pretty darn great! And, by the way, Kimberly beat both Michael and her daughter to the finish line! It may be her big birthday today, but clearly Kimberly shows no signs of slowing down. This is her second year running the Y Turkey Trot (she tries to run one wherever she is) and we hope next year we will see both Michael and Kimberly together on Maryland soil enjoying their Thanksgiving morning together, courtesy of the Y.

Being the clearly thoughtful type who keeps his promises, Michael sent these birthday flowers as well.  Okay guys, the bar has been set.  Don’t be afraid to step up!

Planning and operating an event of this magnitude is a feat of herculean proportions, requiring the hard work of an army of people who work for months to pull off seven well executed and well attended races on Thanksgiving morning. This includes hundreds of Y volunteers and associates who knock themselves out to make this event a successful experience for the runners as well as one that delivers a successful fundraising outcome for under-resourced children and families who very much need the Y in their lives. By all counts everything we hoped for was achieved: a great experience and, while we are still calculating the exact amount, it’s safe to say that something close to $900,000 net was raised for our charitable cause!

Thanks are owed to many, but especially to LifeBridge Health, our title sponsor, and our other top sponsors, McCormick Flavor For Life, Columbia Bank, and DEX Imaging. Happily, the list of generous sponsors is very long, but if you take a look at the back of the shirt, you can see them all.  Please thank them if you get a chance.  They’re good people.  I also want to thank all of our amazing Y volunteers, fundraisers, and associates across the region and across every program area. This year, as with every year, you all remind me of just how lucky we all are to be a part of such a special community of engaged and caring people.