There is a sign that hangs over the doors at the Orokawa Y in Towson that says: “At the Y, we don’t ask who you are or where you came from, we ask instead who you want to be and where you want to go.”  In many ways, that saying sums up the Y’s work and purpose as well as any set of words you could assemble.

I thought of the words on that sign during the closing ceremony of our New Horizons II summer enrichment and workforce development program, held this past Friday at the Y in Druid Hill. The program, which serves homeless teens in Baltimore County and City, and is held at Landsdowne and Dundalk High Schools, as well as the Y in Druid Hill, is now in its 20th year, a testament to both its effectiveness and the determination of the thousands of young people who have participated in it.

At the closing ceremony, held at the historic Y in Druid Hill, several student speakers and a student-made video provided a sobering and telling window into the many challenges they face, but also the incredible resilience they show being a teen struggling through the strains of poverty in our community today. It was hopeful and positive as well as a startling reminder of just how hard it is to grow up in extreme poverty.

With that in mind, our keynote speaker, Kelle’ Avent, a Senior Producer at WEAA-FM radio, was clear-eyed and on-point as she shared her journey growing up in Baltimore raised by her grandparents, given that her own parents were subsumed by drug addiction. Kelle’ shared how she overcame one seemingly insurmountable challenge after another as she graduated from college and moved to Los Angeles to pursue her dreams of working radio (being evicted, a bike accident in the middle of the night and on and on), achieving her dreams through sheer hard work and determination. Her story resonated deeply with every student sitting in that room.

Kelle’ was proceeded by a few student speakers, all of whom were superb. The poem below written and delivered by student Raynard McNill, was especially poignant.

EVEN THOUGH I’m darker than white

EVEN THOUGH I’m living in a bad neighborhood

EVEN THOUGH my clothes are given to me

EVEN THOUGH my parents don’t have that much money

EVEN THOUGH I got holes in my shoes

EVEN THOUGH I can’t do this you can

I STILL wanna DREAM big and be a leader

I STILL wanna make a change

I STILL BELIEVE that my voice is loud

I STILL BELIEVE that I will make a change

CHANGE the way people think about me

CHANGE what I wear 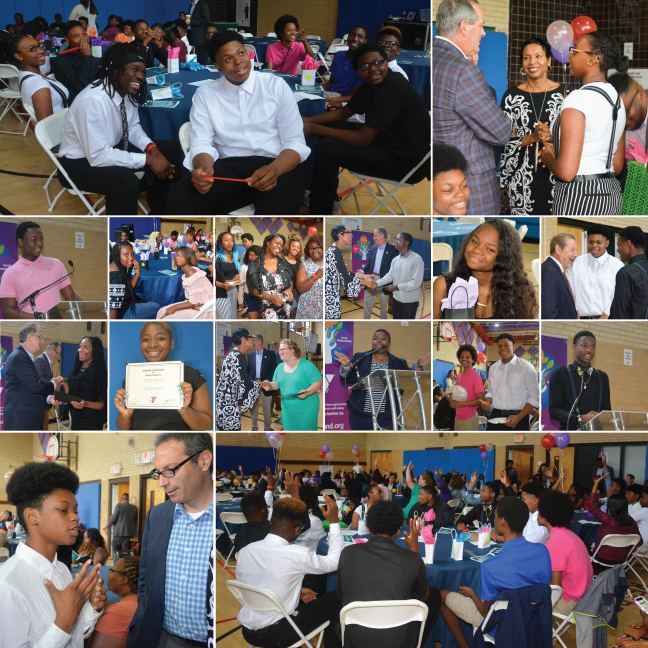 To Raynard and all the amazing students in the New Horizons II program, the Y believes in you. We are in your corner. We respect your challenges and the Y is here for you, now and always.

Hats off to the superb team of Y associates, funders and corporate partners who not only make this valuable program happen, but through it, give outstanding young people like Raynard the courage to imagine a future that is, indeed, changed.