As the lucky recipient of countless stories of Y members, volunteers and associates coming together around a common cause and shared interest in helping others, I regularly see and am gratified by the extraordinary work we do as a community and as a Y. One aspect of our work that is likely not well known is our programming to support those with Parkinson’s disease.

This story starts with Dan Dreibelbis, a volunteer member of our Howard County Community Leadership Board. Dan spent his career teaching fraud investigation and interview techniques as Special Agent for the FBI. Now retired, he works extensively to raise awareness and funds for Parkinson’s disease and teamed up with our own John Derwent, Senior Program Director at the Dancel Y in Ellicott City, to bring Pedaling for Parkinson’s as a group exercise program at our Association. Pedaling for Parkinson’s is a national organization committed to advancing our understanding of how physical activity impacts the motor symptoms associated with Parkinson’s disease.

Our Pedaling for Parkinson’s group started off at the Dancel Y earlier this year with a 60 minute ride and sing-a-long to popular 1960’s and 70’s songs (Neil Diamond’s “Sweet Caroline” is a group favorite!) Take a look. [click the image below] 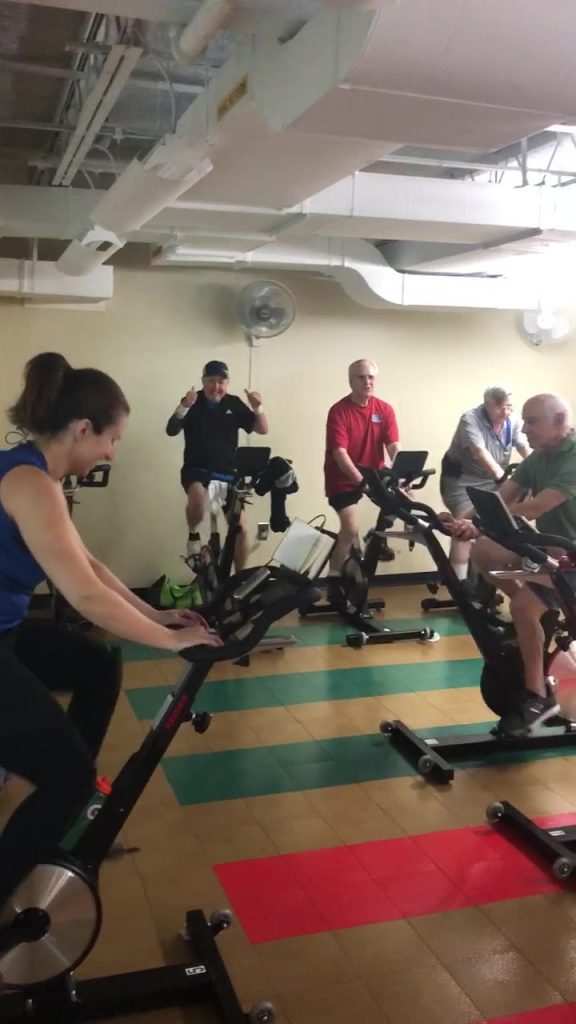 In addition to just being fun and uplifting (already a major health benefit), this program has shown very impressive results. Katie Gandy’s email is worth reading in its entirety to understand the significant impact a program like this can have to improve quality of life.

On Friday, June 1st, the Dancel Y hosted a Pedaling for Parkinson’s Round Table discussion after our regular Friday ride.  At the suggestion of Nan Little during her visit, as well as a few of the current participants, we met for light snacks and to get to know each other a little bit better.  Most participants sit in the same spot of the room each session, so they only are familiar with those who sit next to them.  And as we all know, PD can present with vastly different symptoms in each person, so it is important to ensure we are paying specific attention to detail as instructors to the symptoms for each participant.  It was also important, Nan noted, to ensure they were able to share their stories with us, the benefits of saying these things out loud cannot be understated.

So in an effort to summarize without sharing personal information on each participant, I thought I’d give you a general picture of our group, average length of time since diagnosis, and any noted benefits by both participants and their doctors/practitioners since participating in our program:

Just thought it would be helpful to send this to you so you could see the kind of impact our program is having.  Please share with Judy and Rona at MAPS.  This group is so very grateful for them.

​Thank you Don, Katie, John and all the good people at the Dancel Y who have worked to bring this program to life. What a great example of volunteer and associate collaboration, as well as of the power of exercise to uplift souls and measurably improve the quality of life. I’m looking forward to spreading this program to our broader community across the region.